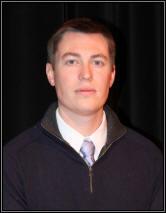 Originally from Madison, AL, he graduated from the University of North Alabama with a Bachelor of Science in Music (‘08), Master of Arts in Education (‘11), and Educational Specialist Degree (‘16).  During his time at UNA, he was a member of every instrumental performing ensemble.  After two years working for Scottsboro City Schools in a similar role, he accepted his current position with Florence City Schools.

In addition to his responsibilities as director of bands at Hibbett Middle School, he serves as assistant band director at Florence Middle School and Florence High School. He is the primary writer/arranger for the “Big Blue” percussion section in the fall as well as the founder / director of Florence Indoor Percussion in the spring.  The ensembles he is associated with have received numerous superior ratings across his 11 years as an educator.  In 2018, he was nominated as the vice chairman for the Shoals Area Band Directors Association and currently serves the local area as Chairman for SABDA.  Mr. Belote is a member of Phi Kappa Phi, AMEA, NAfME, Kappa Kappa Psi and the Percussive Arts Society.  He currently lives with his family in Florence and looks forward to many more years with the Falcon Bands.