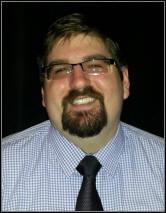 In addition to his duties as Director of Bands  at Florence Middle School, Mr. Jay serves as an assistant band director at Florence Freshman Center and High School and assists with the bands at Hibbett Middle School.