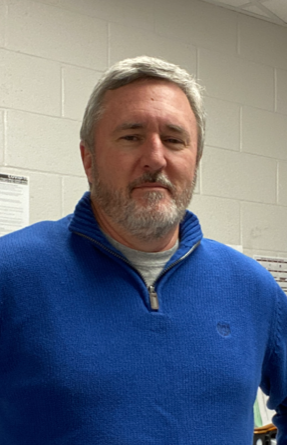 I joined the faculty of Florence City Schools in the summer of 2021 when I was hired as the Band Director at Florence High School.  I am a veteran teacher of thirty-six years, with thirty years experience as a high school band director in Mississippi and six years as a middle school director in Tennessee.  Over the years my bands have received numerous awards in various captions, both at the regional and state levels, and have even garnered a few national level honors at festivals in Gatlinburg, Atlanta, and Orlando.  My most recent high school expereince was at Saltillo High School in Saltillo, MS from 2009-2015 where my bands received All-Superior ratings five of six years, and were honored to be an MHSAA Sweepstakes Band in 2013, 2014, and 2015.

Over the years I have had hundreds of students participate in college and university bands on scholarship, with more than a dozen of my former students currently serving as music educators, including my oldest daughter.  Many of my students have been selected for district and all-state honor bands, as well as college and university honor bands, with several students having made the Mississippi Lion's All-State Band, the highest honor a high school band student in Mississippi can receive.  I was privileged to serve as an officer in both the East Central Mississippi Band Directors Association and the Northeast Mississippi Band Directors Associaiton, and was honored to be chosen by my peers in the NEMBDA as the George Henry Shultz Outstanding Director of the year in 2015.  In the past I have also been honored to be selected, on three different occasions, as a member of Who's Who Among America's Teachers and was also selected as an Outstanding Young Man of America.

I am married to Melanie White and we have four children, Kristin, Collin, Brenna, and Logan.